Overcoming Overwhelm: When the Treatment is as Overwhelming as the Diagnosis. 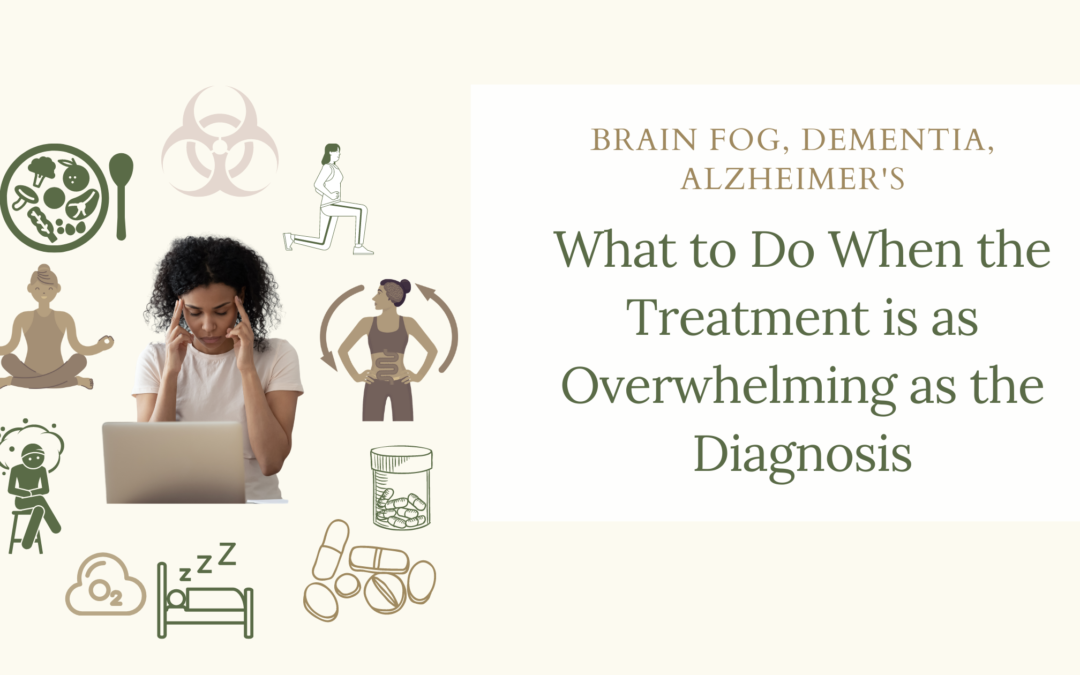 Suppose you are showing early signs of memory loss or are caring for your mother in the late stages of Alzheimer’s. How would you respond to the news that dementia, cognitive decline, and Alzheimer’s may be preventable or reversible? Would this fill you with excitement and spur you to action? Or would it cause you to be overwhelmed, frozen and unsure where to begin?

First, do you even believe that prevention or reversal of cognitive decline is possible? Maybe this is the first time you are hearing this information. When information is brand new, sometimes people respond with disbelief and even anger. The notion is contrary to popular belief and even denied by many medical professionals. Some will state that it is “unscientific” before reviewing the science because the concept is so new.

We don’t yet have thousands of people who have participated in studies proving that lifestyle changes and personalized interventions can reverse cognitive decline, but we do have hundreds. There are many anecdotal reports, as well as case studies and formal controlled studies published in peer-reviewed journals.

Skepticism is normal and even healthy but consider the possibilities and keep an open mind as you learn the science.

In 2012, Dr. Dale Bredesen, after three decades of research, finally moved out of the lab into clinical practice. The inspiration that brought him away from the mice to practice on humans was a 65-year-old patient newly diagnosed with Alzheimer’s, now known as Patient Zero. She came to him, at the request of a friend, instead of committing suicide. After a proposed clinical multifactorial trial was turned down because it was “too complicated,” Dr. Bredesen advised a human, not a mouse, to follow the protocols that he believed could theoretically work…and they did! After this first success story, protocols were adjusted and improved. Then many other practitioners were trained on, and are practicing, what is now called ReCODE 2.0.

Since Patient Zero, one hundred patients highlighted in published case studies showed improvement in cognition following personalized interventions. A formalized pilot study with patients identified with early dementia or MCI (mild cognitive decline) continued to show good news. Eighty-four percent of the twenty-five subjects demonstrated improvement over nine months when treated with personalized functional medicine to address their specific contributing factors. Improvements were seen in both cognitive test scores and hippocampal volume. In previous studies, when single mechanisms were addressed, the best outcome was a slowing of decline. This study indicated that reversal is possible when using a systems approach to address a multitude of factors.

Some people may need more evidence to “believe.”

But what will happen if you wait for more evidence?

What will happen in the meantime? If no changes are made and cognitive decline is already occurring, no intervention likely means more decline!

What could be happening if interventions are initiated? Even if cognitive decline is evident, intervention can stop and even reverse the decline and (bonus)…improve health overall and reduce chronic disease risk!

Previous, and unsuccessful, pharmacological studies attempted to address single mechanisms that had previously been linked to Alzheimer’s including tau, amyloid, Herpes simplex infections, and insulin resistance in the brain.

In the new and successful studies, personalized systems medicine was employed and many areas were addressed based on testing and identifying individual patient needs.

Just some of the areas addressed in personalized protocols:

If cognitive decline can be halted and reversed, it makes sense to believe that following the same protocols can prevent or delay the same. Since brain changes occur ~20 years before symptoms appear, early action is likely to be particularly beneficial.

What is the risk of this multi-system personalized approach? The participants in the pilot study reported no serious adverse events. So the only “risk” would be the mental, physical, and financial investment. But you will NOT hear the long list of potential side effects to which we have all become accustomed at the end of every drug commercial.

“Side effects” resulting from this personalized protocol are more likely to help health overall and reduce disease risk in general with a possible increased life span and health span!

Back to the first question…would you jump into action or become overwhelmed with all that is required to optimize brain health?

How can you do it all?

It is a lot…but having a partner who is 100% on your team can make all the difference.

A health coach can help you:

Understanding how the protocols work and what needs to be done can strongly influence and strengthen “the why.” But as we get deeper into the why question it becomes more personal and can be a driving influence when motivation dips.

Q: Why is optimizing brain health important to you?

Being consciously aware of what is happening in the present moment can help relieve worry, fear, and overwhelm. Putting a multitude of mindful tools in the toolbox creates resources to turn to when needed.

Too much all at once can be overwhelming. Lifestyle changes and building new habits take time and having someone help along the way to dole out the right stuff at the right time can make all the difference.

If you can’t see the end of the road, each turn can be stress-inducing. Having a partner who has “been there, done that” can be the guide that lights up the path.

When addressing brain health through new, but tested, personalized protocols, the minimal risk is well worth the massive potential reward! Seeking out the help of a brain-health-trained health coach can serve you well. Rootcauseology is one example. Schedule a free call to learn more.